Agustín de la Cruz was born in 1955 in Tordesillas (Valladolid). The artist remembers having been drawing on the floor since he was very young. At the age of 5, he moved to Granada. At the age of 14, he combined school, basketball and the School of Arts and Crafts in Granada.

At the age of 18, he finished COU and went to Seville, where the artist searched for life until he entered Fine Arts in 1973. Two years later, he moved to the Faculty of Fine Arts in Madrid. When he finished, he began to work in a private school in Caravaca (Madrid).

During that time, he painted in a wallpapered room, carrying out different studies of quick painting, deformations, dark colours, etc. After 4 years in school, he passed the competitive examinations for the chair of drawing and moved to Almuñécar (Granada) to work in an institute.

In 1985, he began a process in which he found himself: studying, painting and playing the guitar. And, although he has paintings of different sizes, at that time he dedicated himself to expressing his art in small formats.

During the time he spent in Granada, since he moved to an institute there, he painted a lot, of all kinds and finally, large. But around 1995, he already moved to his current residence: San Pedro de Alcántara, where he worked in another institute.

Over the years, the artist has continued to paint, wherever and whenever he could. Although intermittently, the artist has never stopped drawing or painting. He has works in private collections in Italy, Spain, France, etc. He also has public collections such as the Instituto del Padre Suárez (Granada).

Although as the artist himself comments: his best curriculum is sincerity in what he does, and above all, in what he paints; since the artist already feels rewarded with his work.

Agustín de la Cruz is an artist who has always been trying to discover what art is and what its purpose is. He thinks it is necessary to let time pass in order to find the answer to these questions. And for him, art is his way of seeing things, tracing reality and describing it.

His childhood and adolescence, as escape points from his life perspective, determined the person he is now. As he has moved away from those points, he has felt the need to return to the blank support, feeling it as his home and trying to delimit in it the frontiers of his feelings, emotions and ideas.

From his paintings he has always struggled to validate respect, freedom, humility, humanism, sincerity, spirituality… fundamental pillars for him as an artist, who has always tried to vindicate them in his drawings, paintings, portraits, figures and landscapes.

His work is based on the concept of life and observation. The artist observes and as a human being analyzes what he sees through the senses. That is the balance: analyzing what is observed, what is felt through sight, hearing, smell, touch… All of this, full of shapes, colors, volumes.

Since he is very small he has this need to discover, observe and analyse everything that surrounds him. He sees natural textures around him, he feels structures that offer him a spectacle, natural and artificial three-dimensional structures… He sees geometry, lines that run through forms to give him new ones after his analysis; he sees artifice, telephony and architecture; and he sees nature, clouds and horizons…

For him, art is that very thing: reproducing, interpreting what comes to him through the senses, analysing it and transforming it through materials, techniques and concepts assimilated to the rhythm of his life. Art is also a concept that carries all the extremes of reasoning and that many outstanding artists have already synthesized into true conceptual works based on feeling, on the constancy of routine work, on the critical analysis of what they feel and propose, on the study of technique and that everyday craftsmanship. In short, to communicate a series of feelings through all the elements, colour, volume, forms, rhythms…

In short, art is life and so life has responded by giving you more energy and making you feel alive. Work, constancy, observation, assimilation, interpretation, conversion into plastic material, set of craftsmanship and technique in a humble and sincere work.

When he paints, he needs to have a good reason to do so, whether it be a high quality photograph that he himself has taken, or to know the person, to deal with him, to talk to him… in order to obtain as much information as possible, to be able to dispense with all that is superfluous once the creative process begins.

Once he has chosen the motive and having the work surface ready, his way of painting is an arduous and laborious process, of many glazes, of the search for nuances and forms that remain in a given geometry. Once that geometry is established. 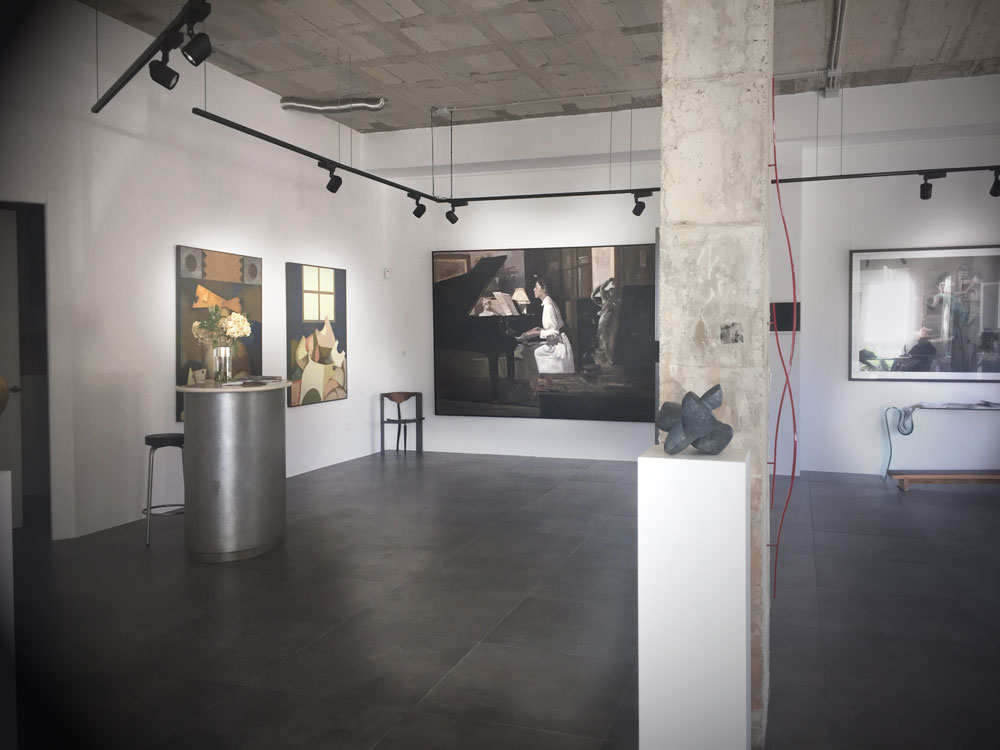